Energy and Mineral Resources Minister Ignasius Jonan has knocked on the doors of foreign counterparts in Scandinavian countries as part of Indonesia’s efforts to meet the target of having a 23 percent renewable energy mix. Last week, Jonan met Danish Prime Minister Lars Lokke Rasmussen to propose cooperation in renewable energy on the sidelines of the 2018 Clean Energy Ministerial (CEM) forum in Copenhagen.

Prior to his visit to Denmark, Jonan also held back-to-back meetings with Czech Republic Energy Minister Tomas Huner in Prague and Finish Energy Minister Kimmo Tilikainen and Economic Minister Mika Lintilla in Helsinki in a bid to explore technology cooperation and investment opportunities.

The Jakarta Post’s Nezar Patria joined the Indonesian delegation to Denmark and sat down for an interview with Jonan in Copenhagen to talk about the challenges of energy security in Indonesia, from business to politics. Following are the excerpts.

Question: What are Indonesia’s expectations from the CEM forum?

Answer: We attended two annual roundtables on renewable energy — the Clean Energy Ministerial and Mission Innovation — in Denmark. In addition, we also toured several places in the country to explore new ideas on clean energy. This visit was made to reciprocate the visit of the Danish prime minister to Indonesia last year. Both Indonesian President Joko “Jokowi” Widodo and the Danish prime minister shared a strong commitment to renewable energy partnership.

What is your view on problems that may impede clean energy production?

Renewable energy relies on local natural resources. For Denmark, the use of solar energy only stands at 2 percent. For Indonesia, the application of solar energy may become an option, since the country is blessed with abundant sunshine throughout the year.

Another potential source is wind power as Denmark has huge wind power resources thanks to strong winds. The development of technology to produce energy is crucial as in the instance of our Sidrap wind farm project in Sindereng Rappang regency in South Sulawesi, where we manage to use an average wind speed of 8 meters per second to generate electricity. With the latest technological developments, we might be able to produce electricity using weaker wind farm speed. Currently, we are constructing wind farms in Tanah Laut, South Kalimantan, and in Jeneponto, South Sulawesi, tapping into a wind speed of 5 meters per second. If we can build wind farms using between 2 and 3 meters per second speed, then we might build more wind farms across the country, such as in Gunung Kidul, Yogyakarta; Pangandaran, West Java; and Tanah Gayo, Aceh, or even in Papua.

Will renewable energy be cheaper?

In Europe, particularly in Scandinavian countries, energy prices stand at 4 to 5 US cents per kilowatt hour (kWh). Indonesia should be able to have a lower price. Denmark has made a huge investment by building offshore wind farms, and although no cost for land acquisition is involved, the investment is massive. For Indonesia, onshore wind farms might appear to be more competitive. The Sidrap project produces electricity at 11.4 cents per kWh. Now, Sidrap is about to expand further and has therefore agreed to sell the power at below 7 cents per kWh.

Do you think we can achieve the target in seven years?

It might not be easy, but it is achievable. The worst-case scenario is to achieve at least 20 percent from the 23 percent target.

There is potential with other untapped geothermal energy resources. We have geothermal plants in Rajabasa in Lampung province and Muara Labo in West Sumatra. The two plants alone can generate 150 megawatts (MW). Both have been constructed and are up and running.

We also have huge hydropower potential. The Poso plant produces 500 MW of electricity while the plant in Merangin, Jambi, produces 600 MW.

President Jokowi has encouraged us to pay attention to three energy potentials: solar, geothermal and hydropower.

In addition, we are also looking into the development of wind power. In our estimate on existing development contracts, we can add between 4,000 and 5,000 MW within the next 10 years. 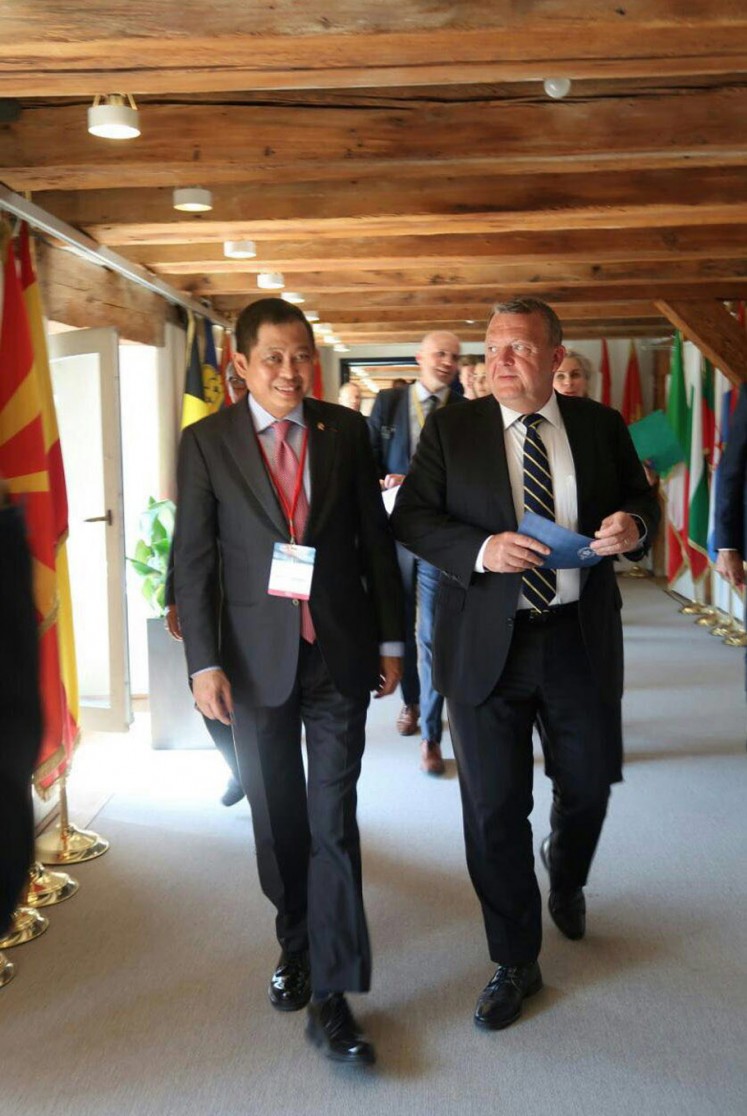 Is there any forecast on national electricity demand in 2025?

No. It is still possible given that we have several geothermal plants, including those in Rajabasa, Muara Labo, and Geureudong in Aceh. Those plants will add extra capacity of 4,500 MW by 2027. With our current capacity of 2,000 MW, we will be able to achieve the 6,000 MW target.

Besides, we expect extra flow of electricity thanks to signed contracts for the development of hydropower plants that will add between 2,000 MW and 3,000 MW, to bring combined geothermal and hydropower electricity production to between 7,000 and 8,000 MW.

What is Indonesia’s interest in the CEM roundtable?

We are pushing for an energy mix. Indonesia will raise its biodiesel mix to 25 percent this year and to 30 percent by 2020. We are asking European countries to give fair treatment by purchasing Indonesia’s biodiesel. Of course, it is up to them whether they transport the fuel to Europe for refinement.

We are also requesting other developed countries to commit to investing more in renewable energy projects in Indonesia. Development should take into account people’s purchasing power. The electricity should be affordable, otherwise it would not have any impact.

Currently, our electricity expenditure is US$30 billion, or 3 percent of gross domestic product (GDP) of $1 trillion. Considering the rate of inequality within our society as reflected in our current gini ratio of 0.39 points, should we raise the price of power by 10 percent, most people would still find it affordable. However, those in the low-income bracket would not be able to purchase the electricity. We have to take care of this to ensure social justice.

In that light, we will go ahead with the policy of injecting more subsidies, especially for poor households availing of the 450VA and 900 VA electricity packages. This year, we expect a surge of 1 million households to start availing of the lowest 450VA subsidized package as part of our village electrification program, then how much subsidy would we be able to provide? If electricity rates continue to increase, the subsidy would be enormous. That’s why we try to keep electricity rates at affordable levels.

However, we are also considering electricity provision from the business perspective. Businesspeople can have a breakeven point after 10 to 12 years of operation as their contracts are for 20 to 30 years. Of course, those businesspeople should not hope to gain profits after only five or seven years of operation. That would be too soon.

With volatile global oil prices, how does Indonesia manage its electricity rates?

In past few years, our fuel consumption has been 10 to 11 percent of our electricity production. However, the portion is currently even as low as 5 percent, so that in the case of rising global oil prices, we would only need to calculate the impact on the 5 percent fuel use.

However, the largest consumption we need to control is coal, since coal-fired power plants comprise 53 to 55 percent of Indonesia’s power generation capacity. We have decided to set a fixed price for coal supplied to state-owned electricity firm PLN under the domestic market obligation (DMO). We have set a ceiling of $70 per ton for coal supplied under the DMO, which means that even if coal prices rise higher than the price ceiling, PLN would still be able to get coal for $70 per ton.

You have been campaigning about energy for all. What do you mean by that?

I don’t see that people oppose the government’s effort to provide cheap energy for all citizens. Some protest, although it is relatively minimal. There has been no rejection to installing solar panels in thousands of remote villages as part of our village electrification program.

We might find some ‘noise’ about the $70 ceiling for coal for domestic use, but it can be tackled promptly. The policy was made in accordance with a presidential regulation requiring coal businesses to slightly lower their profit margin in order to maintain electricity rates.

What are the political reasons behind the government’s decision not to raise fuel prices this year?

I’m not a political person and I don’t understand what activities are counted as politics. The President has instructed us to pay attention to people’s purchasing power. If we raise fuel prices, other expenses, such as for transportation, food and other basic commodities, would also skyrocket. That’s why we anticipate the situation by not adding further burden to people’s purchasing power. With our economy expected to grow by 5 percent, we will do our utmost to provide a subsidy to the needy with all we have, but at the same time we would not let Pertamina suffer losses. We handed the Mahakam gas block to Pertamina for a small price, besides giving it the offshore northwest Java block and eight small other blocks. In coming weeks, we will hand over the Merang and Pendopo Raja blocks, which according Pertamina’s assessment, could yield net revenue before tax of approximately $24 billion within 20 years, or about $1.2 billion per annum. This is a new revenue source for Pertamina. It could use this revenue to ease the impact if it has to deal with a worst-case scenario of global oil prices soaring to $100 per barrel, in which case some say Pertamina would suffer Rp 25 trillion in losses.

At the end of the day, we expect Pertamina and PLN to become more efficient. In my estimate, they could reduce their operational costs by 5 to 10 percent. I have told the two companies about cost efficiency. I will leave them two options — either they introduce efficiency measures by themselves or we enforce some regulations. The choice is theirs.